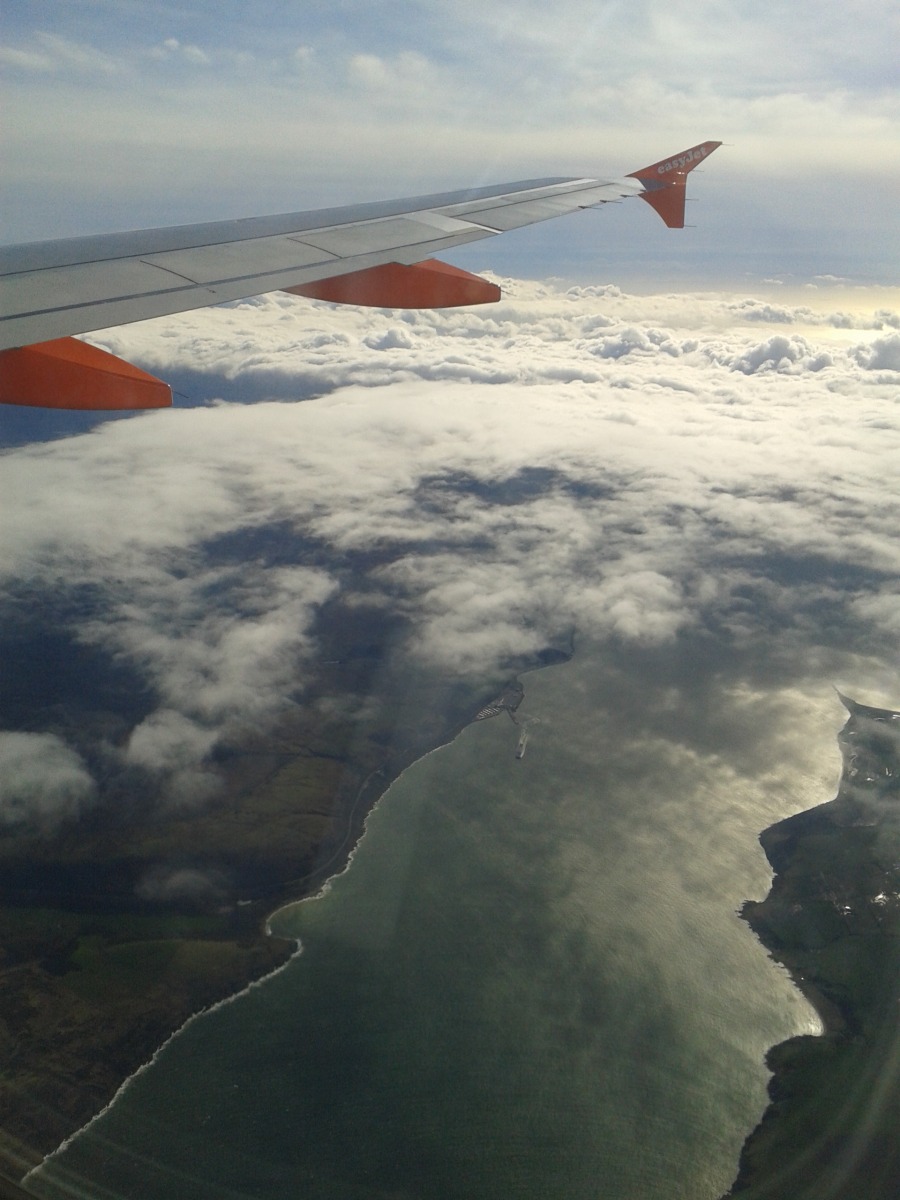 Given my trip was short and there was a lot of Edinburgh I didn’t see, but what I did see of it made me think “I hate* cities, but can I live here for a while, please?” Besides since I didn’t see it all, I have an excuse to go back again!

*I don’t hate cities, I just have a passionate hatred for central London.

So you may be wondering what got me to fall in love with Edinburgh? Well its been about three weeks since I visited there and sometimes during the day I find myself wishing I could be back walking the streets. For me, it was the first time experiencing solo travelling so I found the chance to reflect a lot and to just ‘be’ such a blessing.

Whilst in Edinburgh, Royal Mile, The Castle, Princes St Gardens, Melville Monument of Saint Andrews Square, Scott Monument, Scotman’s Steps, a spot of shopping along Princes Street and several walks across both Waverley and North Bridges grazed my feet.

It doesn’t take a lot to impress me, like I said, the accent alone was enough for me to pay a visit to Scotland initially. Firstly I discovered Melville Monument of Saint Andrew’s Square – across the road from Saint Andrew’s Sq tram stop, believe it or not – which is very pretty at dusk. On the day I visited there was a exhibition on where they had triangular boards around the park leading up to Melville Monument, they told you about space and the way the world works. It is Free to wonder.

If ever in Edinburgh it will be unlikely for you not to cross either Waverley or North Bridge. They are the cities two most central ways across the railway tracks and connect the New Town shopping district to the Old Town and its cobbled stoned architecture. Waverley bridge is – right near Waverley Station – level to Princes Street Gardens. I found it a quaint wee bridge, from Princes Street you go down a small slope onto it. Although under construction in the late 1850’s I thought the bridge contrasts a lot with the historic buildings that surrounds it, so it is very much, here is the old and the new.

North Bridge is one to look up at from Waverley and fits in with the historic atmosphere of the city. At present it dates back to 1894-’97 – although a previous North Bridge was built in 1763 and stood until 1896. It may be the younger than Waverley but it felt more older to me – probably because Waverley bridge is taken over by a massive modern train station. The North Bridge is more appreciated via the Scotman’s Steps as the view right before stepping on the bridge is astonishing. (Yes, even in the pissing rain!) 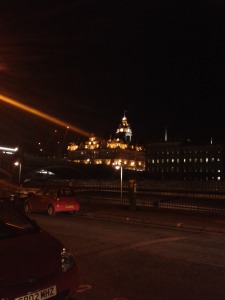 After unsuccessfully trying to find Bobby in Blackfriar’s Kirkyard or Holyrood Park – I’m bad at directions – I stumbled across the immensely stunning place called Princes Street Gardens. Firstly can I just say, do not, I repeat do not leave Edinburgh without seeing Princes Street Gardens! Deciding to take an sunset stroll through the park was the best decision I have ever made (and I make a lot of decisions.) Its this unbelievably gorgeous, leafy-green park, almost hidden away from the hustle and bustle of the city.

Between the whistles of the birds, the wind in the trees and the quiet traffic, its another one of those places where reflection comes frequent. So if you want peace and bliss, this is the place to go to! Overlooked by National Galleries Scotland, the gardens lead you in a curved walk where you can overlook the trains departing and arriving into Waverley. Eventually you can walk onwards to Scott Monument and up to Princes Street. 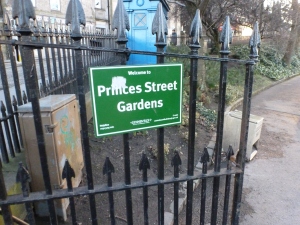 Scott Monument is another piece to appreciate at dusk. It’s large, ‘Victorian Gothic’ shadow sits at the top of Princes Street Gardens. It’s the largest monument that has been dedicated to a writer in the world; Sir Scott Walter, a Scottish Novelist and Poet.  The monument itself is made up of 67 Statues and has 287 steps which lead you up to breathtaking views of the city. Although I didn’t climb this particular monument as I just thought it symbolised a prop in a horror movie and wasn’t aware that it could be climbed! 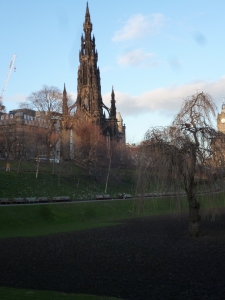 Like I said before, North Bridge is better viewed at from the top of Scotsman Steps. On my first wander out of my hotel I found this colourful marbled entrance with a curved arch saying “Scotsman Steps”. Basically this artist Martin Creed was commissioned by The Fruitmarket Gallery in 2010 to create a piece of artwork. Known as Work No. 1059, 2011 Scotmans Steps, each step has a different colour of marble in them and are a bright link to the city’s old town. I’m not going to lie, in the evening they smell vaguely like urine and cannabis but they are really pretty to venture up because when shadows from the bridge above cast through the railings, the photo opportunities are immense, well if you have a really good camera. Unfortunately during this trip my camera decided to break so I was stuck with a digital Lumix camera, instead of my DSLR.

I am a bit of a shopper. I like clothes, I like accessories and I love poking and prying at things I can’t really afford. Princes Street is Edinburgh’s main shopping district. It has the historic department store Jenner’s, Topshop, Primark, Monsoon/Accessorize, H&M, M&S and a lot more, including restaurants, cafes and hotels. There is also Princes Street Mall, which I found very minimal for shopping but hint: the toilets are worth the 30p as they actually are clean. Haymarket is another part of Edinburgh full of shops, more Hotels and Hostels. Its a place I only passed on the tram and train but it looks a lot more expanded in regards shops and places to eat.

The locals in Edinburgh are lovely, the City Centre is a busy place and yet I still found the idea of stopping someone to ask for directions easy, instead of daunting. In the shops along Princes Street I was given great customer service which was a plus. I visited Primark – because it was three levels high, its Primark, I like to annoy people by saying Pre-mark, instead of Pri-mark and I needed leggings – and the girl who served me actually had a conversation with me!

Photographic Highlights of my time in Scotland’s Capital: 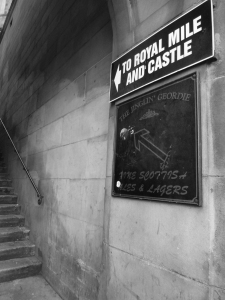 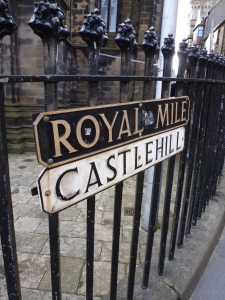 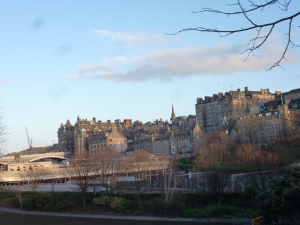 My mind is always mixed with complications so I didn’t want to be in a complicating place.